Reminder, the SOB’s are planning a Green Bay area brewery tour!  $40/person paid at the time of arrival on the bus.  All stops are booked for below times. We have 3 more spots to fill on the bus!  Sign up HERE

Drop off Park and Ride – Oshkosh 50 min 7:00
Scott kicked off the meeting as each SOB held up a pint of Guinness as an early toast to St. Patty’s Day.  We discussed the possibility of bringing back Casks & Caskets.  Some potential options are maybe doing a smaller version or hosting a beer dinner type event.  The board is also poking around at the idea of the SOB’s bringing back Brews ‘n Blues.  To make any of those fun events possible, it requires interest and hard work from the club.  If you have any interest in supporting an event, please reach out to a board member.

Big Brew Day is coming up on May 7th!  As of now, the club is expecting to be able to brew at The Cellar, but we need to confirm.  Maybe we could even organize a food truck to be present during the brew.  If you’re looking to have a beer ready to serve at Brews on the Bay this summer, this would be a great opportunity!

Are you interested in attending a Timber Rattler game with a bunch of SOB’s?  The board will look into some possible dates and share with the club to get interest.  Likely would be a game towards late summer.

While we were sampling some homebrewed libations including an Irish Red Ale, barrel aged maple Kviek, and Chuck’s “Itchy-nut Brown Ale, Kurt shared some of his cleaning techniques with the club.  Part of Kurt’s cleaning best practice is to bake his glassware.  He uses his kitchen oven at the lowest setting and steps up the temperature in 100°F increments until he reaches 350°F.  After an hour of getting baked, he turns off the oven and lets the glassware slowly cool with the door closed.  He warns if you let the glass cool too quickly, it can become brittle and break.  So be careful!  Thanks for sharing Kurt and if anyone has any suggestions for additional educational topics, reach out to a board member.

See you in April!

The SOB January meeting was held virtually on January 19th.  We hope to be able to resume our in-person gatherings for our February SOB Christmas Party!

Speaking of Christmas Party, it has been rescheduled for Sunday February 20th at Fifth Ward Brewing at 6pm!  Sign up is HERE for the pot luck.  Reminder that there will be an optional gift exchange.  If you want to participate, please bring a wrapped gift of $25 value.  Reminder that our regularly scheduled February club meeting would be held during the party.

Elections were held during our virtual meeting.  Please congratulate the below people on being elected to the SOB Board!  We would like to thank Bill for his years of service as Web Coordinator!

The club also voted on the by-laws changes that were previously sent out for review.  The club voted to approve the changes.

The club is getting low on SOB merchandise to sell at events.  The board proposed buying more merchandise including t-shirts and other swag.  The proposal is about $500.  The club voted to proceed with getting the order quoted and moving forward with the purchase.  If the purchase amount exceeds the $500, then the board will come back to the club with an updated estimate.

The Fond du Lac Brew Fest is coming up on Saturday February 5th.  If you are interested in attending and serving beer to represent the SOB club, please sign up HERE.

Ideas for upcoming educational meetings.  The club is thinking about showcasing some of the brewing software that is available.  If you are interested in leading an educational session or have other ideas for a topic, please contact Scott or another board member.

The club is planning a Green Bay area brewery tour!  More details to come, however there are a lot of good breweries in the Green Bay area for us to explore.  We are debating whether a bus rental is appropriate for the tour or if we organize a few cars for a carpool.  If you have interest in the tour or suggestions for travel arrangements, stay tuned for a sign-up or reach out to a board member with your ideas.

Looking forward to seeing you all on February 20th for our Christmas Party! 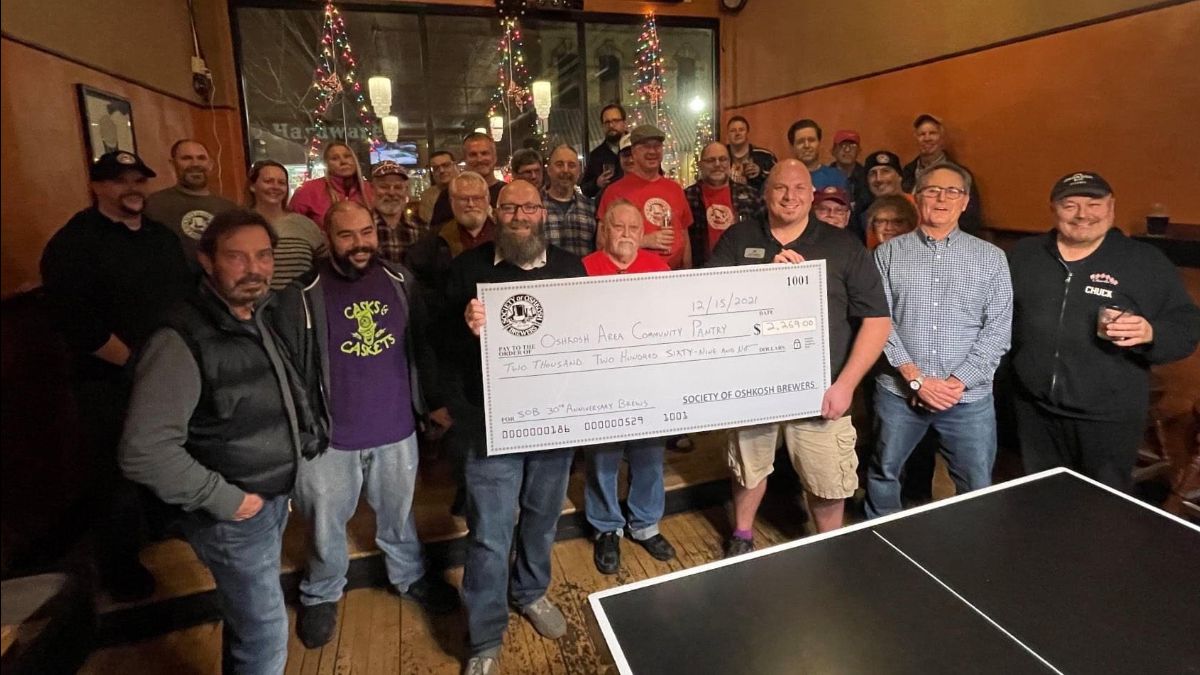 Our October 20th meeting was held at Lion’s Tail Brewing in Neenah.  We started the meeting the only way us SOB’s know how, by sampling beer!  Jeff poured us a sample of a few Oktoberfest beers including Lion’s Tail’s, McFleschman’s and Founder’s throughout the meeting.  It was interesting to see each brewery’s variation of the style!  Thanks Lion’s Tail for hosting!

Scott gave us an update on the 30th SOB Anniversary beers fundraiser.  We’ve received about $1,400 in donations!  We’ll plan to make a donation to the Oshkosh Area Community Pantry and hoping to have a representative from the pantry attend our December meeting for a picture with the donation check.

Speaking of donations, by attending Brews on the Bay, we’re able to donate $300 to the Menominee Park & Zoo Foundation from our collections.  Great job SOB’s by serving your delicious libations!  The club will look to serve again next year so stay tuned as we get closer to summer 2022.

The board is reviewing the possibility of getting Casks & Caskets going again and currently looking for potential venues.  However, if we want to host Casks & Caskets as a club, we need your help!  Volunteers are needed to help organize, brew beer, etc.  If you have interest in participating and helping make this amazing charity event happen, please contact an SOB board member.

Lastly, if anyone is interested in acquiring some homebrewing equipment, we were contacted by someone outside of the club who would like to get rid of some.  The list of equipment she has is as follows:

If you are interested, please respond to the club email address (realsobs@gmail.com) and we can get you connected to discuss more details.  With that, here’s a look at what the SOB’s have planned for the upcoming months: